CONSULIER: HISTORY OF A VISION

With this mission of building the Ultimate sports car, Consulier was formed in June 1985. The car would consist of a lightweight body, using a powerful engine and a straightforward chassis. In 1986 Mosler bought the Riviera Beach complex which housed Mosler Auto Care Center. In early 1987, Consulier moved into the building. Consulier was still in development with all bodies being produced in Cocoa Beach at the time.

In August 1987, Consulier leased a composite shop operation a quarter mile way to build the molds and the body chassis. All research, development, assembly and production of bodies and early production prototypes were done in Riviera Beach. Throughout 1988, research, development, testing and refinements continued. The building, staff environment and parts were ready for production. Consulier decided it would make the car in 3 models; the GTP sport,  a high-performance model, the GTP LX loaded with luxury amenities, and the GTP CV a luxury convertible.

The prototype - Proof of concept

This was the prototype car Mr. Mosler put together as a proof of concept. (Pictured below) It proved his theory that a lightweight monocoque composite car could out run the other cars on the track, and it did. The next step was to take it from prototype to a road legal car.

Bob McKee - master of the pavement

the start of something real

​          Concentrating on competition-only cars, Warren Mosler & Chet Philip started winning races across the country. Starting with a core group of drivers led by Philip, Rick Titus, Bruce Macinnes, Bob McConnell, John MacComb, John Dinkel, Steven Taylor, Tom Reese then hiring drivers as diverse as Shane Lewis, Scott Lagasse, and even Winston Cup driver Ken Schrader. Their track record is distinguished: 40-some wins, including victories in SCCA regional and ITE divisions, in the IMSA Bridgestone Supercar Series, in the Twin-Six Enduros at Sebring, at 24-hour races at Nelson Ledges and Moroso, and in Car & Drivers own "One Lap of America."

The Consulier quickly gained the reputation for being one of the most reliable race cars on the track with low operating expenses and excellent driveability in all track conditions. It didn't take much for Bobby Rahal to recognize this when he contacted Consulier Industries to have them send a few cars to the Mid Ohio school to teach their new drivers the ropes. It was not surprising to see some students that drove the GTP during school go on to purchase one as their "Track Day" car. The cars were ultra dependable with many different drivers using the cars day in and day out, the 3 most replaceable things during their time at the school were brakes, tires and an oil change! 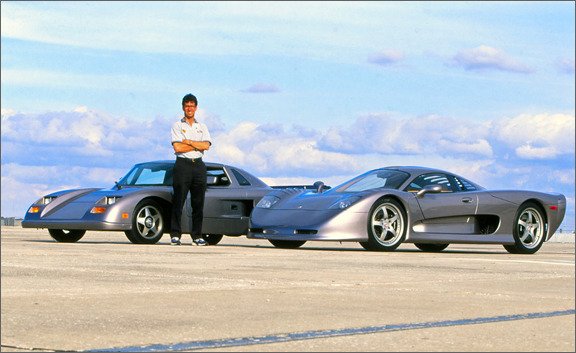 ​ " We are so confident in the GTP's superior performance," described Mosler, " that we offer a $100,000 to anyone who can drive a faster race track lap with any other regular production car."