It's WAS All About The Design... 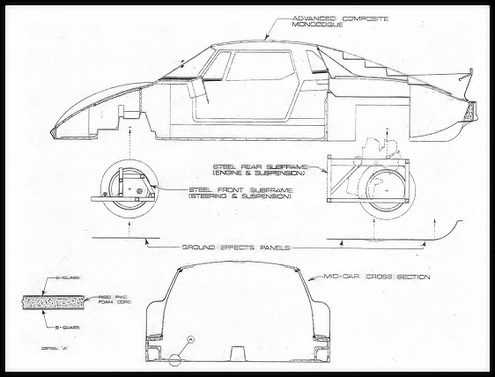 In 1985, one of the most groundbreaking designs in automotive history went into production - the Consulier GTP, the first production car with no structural metal. Weighing in at 1900 lbs and using only a Turbocharged 2.2 liter Chrysler engine with 175hp, the GTP ran circles around most sport cars; prompting the company to take it racing.

​With over 1g of grip on the skidpad from the factory, the GTP was in its element on the racetrack, so much so, they were asked not to return to many of the racing series they entered after numerous uncontested victories. Bad press and no compromise race-bred styling led to slow sales. Several redesigns based on the original GTP were made, which included the Intruder and the Raptor with it's famous V shaped windshield to reduce drag. In 2001, Mosler introduced the MT900.

The MT900 followed in the footsteps of the GTP as it was a no compromise race-bred road car. With it's carbon fiber chassis and 350hp LS1, it accelerated to 60mph in 3.5 seconds and ran the quarter mile in 12.0 seconds. Several iterations of the MT900 were made over the years, including the Photon which boasted improved performance and set 9 performance records at the time of testing with Motor Trend.

The Consulier GTP - "A Supercar Ahead of Its Time!"

The GTP by Consulier Industries featured world-class handling, so the firm offered a $100,000 challenge.
Riviera Beach, Florida - - Consulier Industries, confident in the superior performance abilities of its GTP sports car, will pay $100,000 to anyone who can drive a faster race track lap in any other regular production car. The GTP by Consulier offered in Sport, LX and CV trim, features advanced composite monocoque construction, a mid-mounted 2.2 turbocharged engine, anti-lock brakes, and is manufactured in the firm's Florida Factory.
The base price of the GTP sport retails for $49,000 the luxury quipped LX features leather Recaro seats, Alpine sound system and moonroof sells for $58,900 and the new CV convertible equipped with the same as the LX less the moonroof is priced at $62,500. The GTP was created on the premise that the racetrack driving experience could be duplicated comfortably on the street.

" We wanted to combine straight line performance, superior cornering ability and excellent safety" said Chet Fillip, Consulier's head of research and development. Factory test measuring cornering capabilities show the GTP outperforms the competition including the Chevrolet Corvette, Lotus Esprit, and the Porsche 911. In October 1989 at the Road and Track manufacturers challenge at Lime Rock, CT, the GTP turned in the fastest lap, easily out running the ZR1 Corvette. 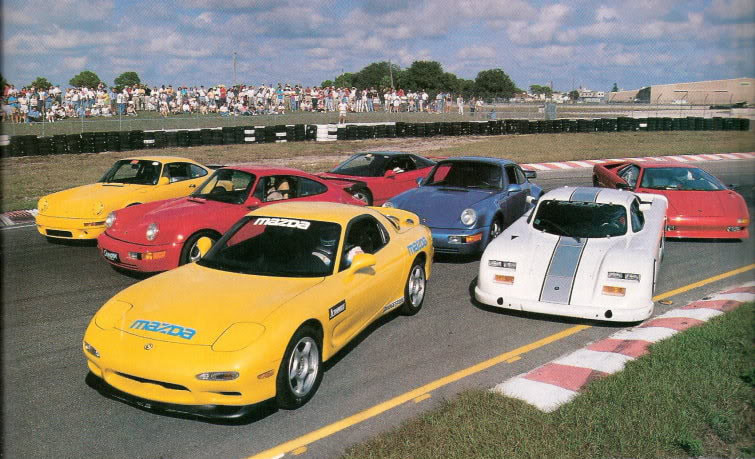 The GTP's inboard 4-wheel independent suspension features lower a arms and upper rocker arms coil-over shocks and front torsional anti-roll bar. An impressive characteristic of the gtp's suspension is it's virtual elimination of bump steer the tendency for a vehicle to behave unpredictably when driving under potholes railroad tracks and rough roads.

"The GTP will ride over these obstacles at high speeds without bouncing around darting around or jolting the passengers," said Fillip. The first step in conceiving the gtp's handling formula was identifying the aspects that would set it apart from the competition.

​          "There was an extraordinary difference between now was possible in terms of performance in control of the race cars and what was being offered in high-performance sports cars," explain Warren Mosler, Consulier founder. "As an owner of many sports cars, I found there was always something that took away from the driving experience such as lack of direct feel with the road, a jarring bumpy ride or lack of balance. These are compromises which come with excess weight. I wanted to build a car that improved on these areas."

The initial goal in achieving the cheapest performance was to keep the weight under 2000 pounds. This would be achieved primarily with advanced composite monocoque body, and advanced chassis and a high performance lightweight engine. The GTP has an enviable ratio of under 10 points per horsepower  "with this low weight and high output engine, the straight line performance, cornering and braking would all be excellent,"  said Fillip. "most of the oversteer and understeer problems associated with heavy cars have been eliminated."

The second consideration for the GTP was its balance. "The philosophy was an evenly balanced vehicle would be easier to control, react more predictably to hard cornering, and have better braking. " With its transverse, mid-mounted lightweight engine, the GTP achieves a 37/63 percent front-to-rear weight distribution," in hard braking situations, the mass of the car shifts forward, therefore creating a perfect balance among all four corners of the car, this allows the brakes at all four corners to work at an Optimum level," added Fillip.

The Consulier $100K Challenge
The next step was to design a suspension system that would be flexible, allow hard cornering and absorb the shock of bad roads without doubling the driving experience. For this task Mosler employed the services of Bob McKee, renowned for the development of many prototype production and race cars. Mckee designed both the GTP's suspension system and the front and rear subframe which bolt onto the composite chassis.

"This suspension is very straightforward, there was no committee comprises," said McKee. " Mosler wanted a street car with neutral well-balanced handling, excellent cornering and no surprises, we gave that to him." The final factor in the GTP's handling equation is the aerodynamic design in which is reminiscent of the IMSA GTP cars. As the speed increases, the air presses the car down harder on his tires further improving performance and stability.

Warren Mosler said,  " The sum result of the GTP's parts is an exhilarating Driving Experience unmatched by any other sports car."

At the end of the day, the money was safe!

On that Saturday in December 1991, in response, they got owners of Porsche Carrera Turbos,  a Lamborghini Diablo, a Ferrari F40 and a Honda NSX to turn up. Automobile Magazine also persuaded Mazda Motors of America to bring along a pair of new RX-7 Turbos, figuring that it was one of the worlds few cars that could match the low-weight, high power configuration of the Consulier.
A team with a Ruf-modified 911 porsche showed up to run and it was a full-tilt GT1 race car. It had full roll cage, weighed 2400 lbs. & had a 600 hp engine sitting on 14" racing slicks. They pulled a lap time of 1:19.5 on that Saturday. The Consulier had set its best time of 1:20.0 on street tires... Now "Team Ruf" didn't expect to win the event, there wasn't anything street legal about the Ruf Turbo, It was a GT1 race car with slicks and this was a factory (manufactured US Legal) street car shootout but Warren Mosler said it would be interesting to see what it would do (the Ruf) with some street tires on it.
​           So the guys dug up some yokohama street tires and went out to run a 1:24.0. That really wasn't much better than the new Mazda team that ran a 1:23.321 lap. Warren said he thought that it was great that his street car (the Consulier GTP) with street tires, was only a 1/2 second back from a full tilt GT1 race car with 14 inch wide racing slicks!

In the end, no one with a factory OEM "manufactured US legal" car (as per rules of the event) came close to getting the money!

Where is This consulier Today?

There were only 2 factory produced series 2 Consulier GTP's manufactured with the Shelby 2.2L T3 - 16 valve power plant. The $100,000 challenge car was the first and is located at Mosler Motorsports under the ownership of Jacob Mosler who has set up a full tilt race shop and a Consulier GTP / MT900 Hall of Fame...

The $100,000 Challenge Shelby Consulier T3 car (pictured above) has received some cosmetic changes over the years but still has everything it had back in the day when it won the $100K challenge!

Yes, the factory only produced 2 Shelby T3 - 16 valve Consuliers, both were series 2 cars. The first one you just read about, the 100K challenge car. The 2nd just happens to be "The last Consulier GTP" produced. This car was special ordered as a "Track Day" car with almost every option the factory offered for racing but, it was going to be a street car too, following along with the factories early marketing campaign slogan of "Street Car, Race Car... Same car!"

This GTP, benefiting from 7 years of R&D at the factory and years of prime racing experience, real time assessments of what worked and what didn't. All of that experience and millions of dollars spent not only on production of the GTP from 1985 to 1992 (about 100 vehicles total, including race cars and variants) but also millions spent winning races at the nations best race tracks, honed to perfection by a winning team of world class drivers under the leadership of Indy 500 driver Chet Pillip. All of this, cumulated into one car...

Click the link to read about the vision of Warren's GTP supercar...
history of a vision